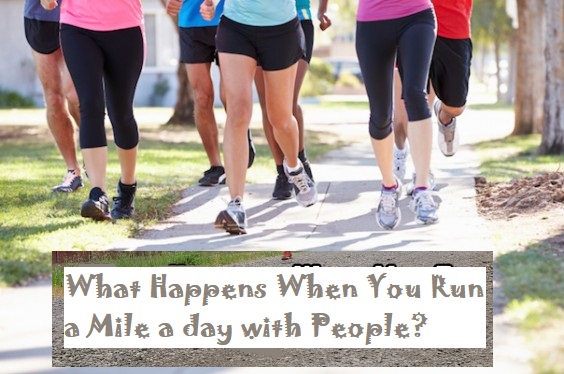 Running is usually seen as a solo sport, but you’re missing out if you have not been enjoying the benefits of running a mile a day with a team. Ask someone to join you for a run or sign up for a local running club, or running group.

If you run a mile a day with a group, you are guaranteed to become a better runner. Obviously you’ll need to continue to put in a lot of hard work, but the benefits of running a mile a day or trainning in a group environment are huge, when compared to running alone; it has tremendous benefits.

BENEFITS OF A RUNNING A MILE A DAY WITH A GROUP

There are lots of big benefits you’re going to be able to enjoy when you decide to start running with a group. You’ll become a better running, you’ll become a more focused athlete, and you’ll discover that it’s a lot easier to get more out of every run you go on with a team behind you than it ever was, alone.

You’ll find that it becomes easier to stick with your running schedule when you’re going out as a part of a group, something that those new to running are really going to appreciate. You can enjoy the following benefits of running a mile a day with a group:

You must agree that it’s much safer to run a mile a day in pairs or with a group, and it is tough to get lost if you’re with a group. Even if you do take a wrong turn, you have each other to figure out your way back. Furthermore, when running with a group, you’re less likely to need to listen to music, which means you won’t be distracted and will be able to hear cars or other hazards.

In the event that someone suddenly gets sick or injured in the group, there’s always someone handy to help. Lastly, potential attackers are more likely to strike a lone runner than one running in a group.

Running groups hold you accountable when that little voice in your head tries to convince you to skip the run for another day. When there are others counting on you, you’re more likely to show up in order not to disappoint. One of the reasons people quit running is because they lack this accountability.

A running group will make sure that you are consistent in your running workouts, and also when it comes to putting in the consistent effort you need to get better and faster.

You’ll want to stay with the team, and the pressure of letting down or failing your running team is going to be enough to push you past any consistency issues you’ve been dealing with.

Some people prefer to run alone so they can sort out their thoughts and do some brainstorming, but the benefits of running a mile a day in a group may actually get your creative juices flowing even more than running solo because you’re able to bounce ideas off other people and ask them for feedback on a solution or problem you’re working out.

Another Benefit of running a mile a day with a group running is that you get your own personal cheering squad, being that members of running clubs and teams usually root each other on during races and support one another through long runs.

You’ll also be more motivated to stick to your training because you and your running partners will hold each other accountable, knowing that your teammates are expecting you to show up.

Plenty of important business conversations have also taken place between runners on the road, and running with co-workers, clients, or even your boss, is an ingenious way to network and build professional relationships.

Chances of meeting new people are there when you run as part of a group, and meeting new people through running is also a great way to expand your professional circles, with the potential of finding a new job, making new acquaintances, or learning about other business opportunities.

There are actually some psychological benefits of running a mile a day with a group, and social facilitation which means “an improvement in performance produced by the mere presence of others” is much more likely.

When running with a group, you get caught up in the pace, and you might not recognize how fast you’re even going. Your brain encourages you to keep up with the team when you might have slowed down alone.

It is a fact that the benefits of running a mile a day with other people create excitement that helps you run faster than you thought you could on your own.

Running a mile a day is a great way to support your overall health and fitness. “You get all the benefits of running in general, like supporting cardiorespiratory fitness and bone health, without the volume of mileage that can potentially cause injury“