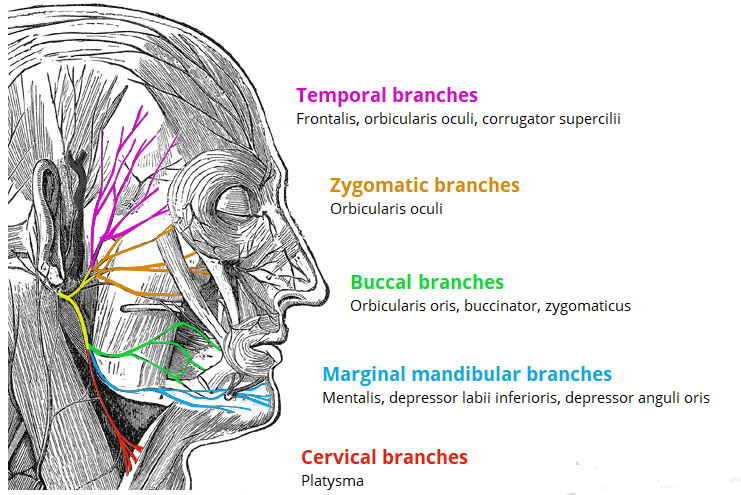 The facial muscles are also called the craniofacial muscles. They are a group of around twenty skeletal muscles that are flat and lies underneath the skin of the face and scalp. You may not have been aware, but we put the facial muscles into operation when we speak, laugh, and eat.

Keep reading to know more about these facial muscles that are under the skin of the face.

Usually ignored, the facial muscles are very important for expression, that is, for gestural communication; as well as for relief and the shape of the face.

The muscles of the face are distributed around the eyes, the mouth, the nose or the forehead, even the ears – which do not move at will.

Most facial muscles originate from the bones or fibrous structures of the skull and exude to implant on the skin. By contracting, the muscles pull on the skin and exert their effects. They are the only group of muscles that are inserted into the skin.

Functions of the facial muscles

The muscles of the face fulfill specific and differentiated functions, although they can work in a coordinated way to produce expressions. It can be said that they perform four types of basic tasks:

The Anatomy of the Muscles of The Face

This is the largest group in terms of the muscles of the face. They allow us to open our mouths, move it to one side or the other, project our lips to speak, sing, laugh, eat and even kiss.

It also helps us to bulge the cheeks to blow when whistling or playing a wind instrument. Pipers and trumpet players usually tend to develop toned mouth muscles.

Muscles around the eyes

Around the eyes, there are almost as many muscles and functions as complex as around the mouth.

Orbicular of the eyes: This muscle of the eyes is made up of an eyelid and an orbital part. The palpebral area forms the eyelids and the orbital region encloses it concentrically.

The nasal group of facial muscles is associated with movements of the nose and the area around it. There are more muscles in and around the nose than we might believe. Although they are small and with little relative mobility, they mostly participate in respiratory function and expressiveness.

One of the main ones is the nasal muscle or nasalis. It is located on each side of the back of the nose. It consists of two parts: a wing and a transversal.

It compresses the nasal opening, assisting in deep breathing. To this same extent, it can convey the idea of ​​anger.

In the ears, or rather around the ear, there are muscles too. For some animals, they are useful, as it helps them position the ear towards the sound.

Other muscles of the face

In the face, there are other muscles, although they are not so visible, and we do not perceive them when we look in the mirror, they have important functions. Such is the case of the external pterygoid.

This muscle is located in the upper part of the lower jaw. Participates in the chewing process and is responsible for opening the mouth. So it also comes in when we talk, laugh, or yell.

It is a large muscle, extending from the eyebrows to the occipital bone. The occipitofrontal is the one that produces the wrinkle of the forehead, which is marked when we are surprised.

How to Exercise the Facial muscles

Our life depends on the proper functioning of the muscles of the face; that’s how it is. They are very important. We need them to eat, to talk and ask for help, to interact with others.

Although it is not common, it is possible to exercise the facial muscles, similar to when we engage in exercises and workout.

There are, for example, facial yoga routines, which not only tone them but also help you look young. One of the factors that make the face look flabby is the loss of tone in the facial muscles.

So form the habit of smiling a lot, as that is the best exercise for the facial muscles.