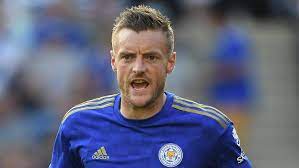 Jamie Vardy was born in Sheffield, England, on the 11th January 1987. His father was a crane driver and his mother was a legal secretary. Jamie was not particularly skilled in academics, and he preferred to play football.

Jamie wanted to be part of the Sheffield Wednesday team but was refused because he wasn’t ‘good enough. Jamie decided to abandon his dream of becoming a football career after a while.

Jamie made his Halifax debut in August 2010 and scored the winning goal. He was the wonder boy of his team for his performance in the remaining matches.

Jamie’s popularity grew and other bigger teams wanted him to be part of their team. Jamie signed a three year contract with Conference Premier’s Fleetwood Town in May 2012. This was a non-league record payout. Jamie had a poor first season and struggled with form all season.

He was invited to the national team in 2015. In 2015, he played his first match against the Republic of Ireland in Dublin.

Arsenal offered him a record-breaking price in the following year as they were eager to purchase him. Leicester offered him a better deal, but he was retained by them. Jamie was able to return to Leicester.