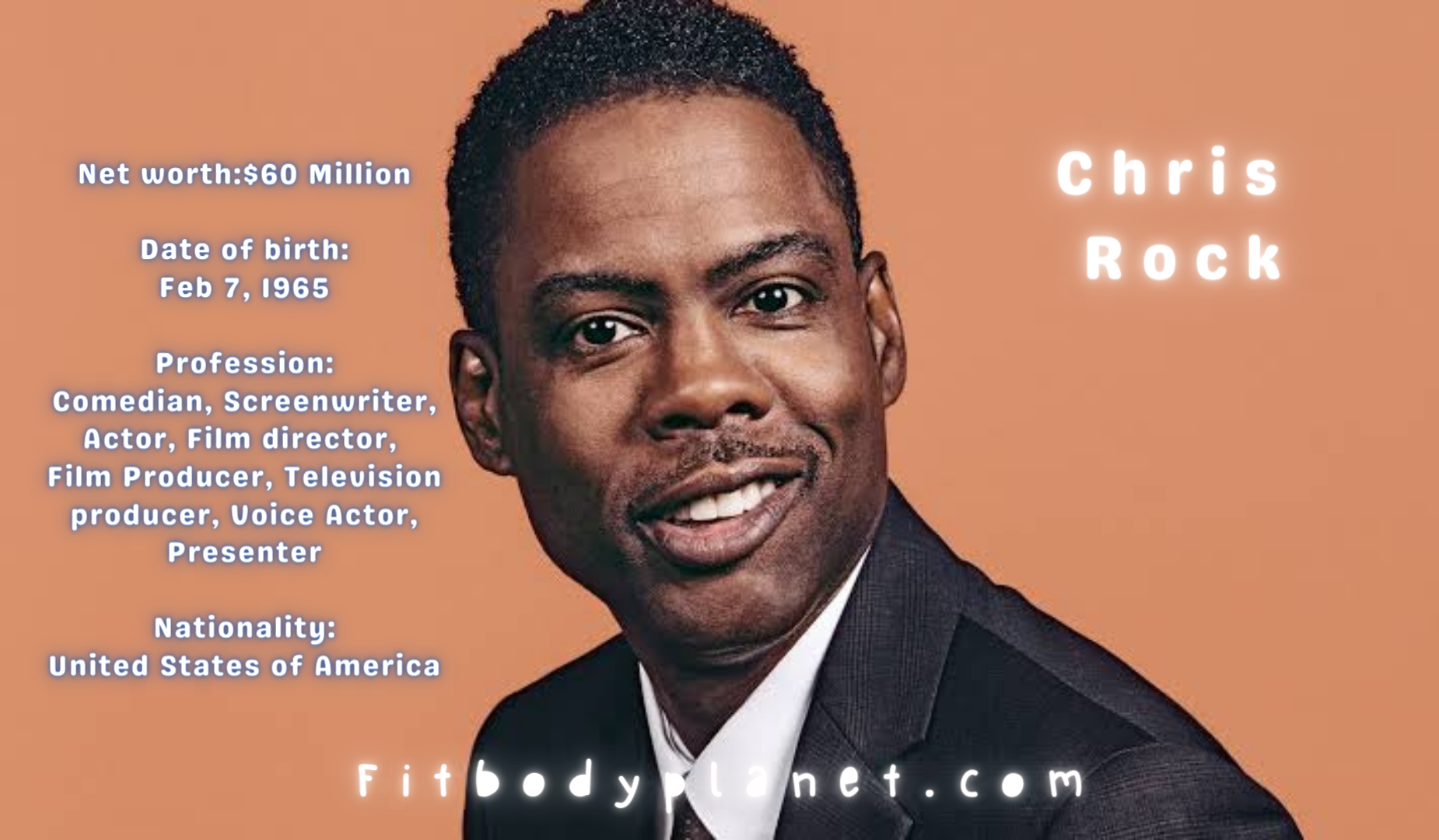 American comedian Chris Rock has a net worth in excess of $60 million. Although his net worth is likely to be higher, he lost millions of dollars (reportedly as high as $40 million) during a divorce settlement with Malaak Compton, his wife of 20-years. After 20 years of marriage, they divorced in 2016.

Chris gained his first wide audience with “Saturday Night Live” back in the 1990s. However, he is also well-known for his acting skills in films like “The Longest Yard” (2006), “Madagascar”, and “Grown Ups”.

He also created and produced the semi-autobiographical sitcom “Everybody Hates Chris” which aired 88 episodes between 2005 and 2009. A Comedy Central poll voted him the fifth-greatest standup comedian.

Christopher Julius Rock was born on February 7, 1965, in Andrews, South Carolina. Rock and his parents soon moved to Brooklyn, New York. Rock finally settled in Bedford-Stuyvesant, after a second move.

Rock was bused from Brooklyn to attend school in predominantly white neighborhoods. He endured bullying and harassment by white students. He dropped out of high school and began working in fast-food restaurants to earn his GED as the bullying continued.

Rock began his journey into stand-up comedy at Catch a Rising Star in New York City in 1984. He gained popularity as he performed and was even offered a role in “Miami Vice”.

Eddie Murphy met Rock at a nightclub in these early years and became his friend. He mentored Rock and gave him his first movie role in “Beverly Hills Cop II” (1987).

Rock was a member of Saturday Night Live (SNL), in 1990. They became known as “The Bad Boys” of SNL together with Adam Sandler and Rob Schneider, who were also new cast members. In 1991, he released his first comedy album, “Born Suspect”. He was also praised for his portrayal as an addict in “New Jack City” that year.

Rock quit SNL two years later and appeared on “In Living Color”, a prime-time sketch show that focuses primarily on African-Americans. Rock was only in six episodes of the show’s final season, which was canceled one month after he joined.

Rock was the writer and star of “CB4” comedy, which cost only $6 million to produce but earned $18 million. Rock’s first HBO special, “Big Ass Jokes”, was released in 1994. But it was his 1996 sequel “Bring the Pain”, which earned him two Emmy Awards.

This gave him a reputation for being one of the most popular comedians in America. Rock gained even more popularity as a commentator on Comedy Central’s “Politically Correct” during the 1996 United States Presidential Elections. He was nominated for another Emmy.

His HBO comedy specials, “Bigger & Blacker”, (1999) and “Never Scared” (2004) were Time and Entertainment Weeklysinging their praises for him as “the funniest man in America”. HBO aired “The Chris Rock Show”, his talk show where he interviewed politicians and celebrities.

He also won an Emmy award for writing. His comedy albums “Roll with the New”, Bigger & Blacker, and “Never Scared” were all Grammy-Award winners. Rock’s fifth HBO special, “Kill the Messenger”, was released in September 2008. It won him an Emmy for outstanding writing on a variety of music shows.

Rock’s comedy specials have continued to be a huge success into the next decade. Netflix released two stand-up specials featuring Rock on October 30, 2016. He was reported to have been paid $40 million ($20,000,000 per special). His first concert special in ten years was “Chris Rock: Tamborine”, which was released on February 14, 2018.

Rock is not only an actor, but he also plays the roles of director and writer. Rock directed wrote and starred in “Head of State” (2003, “I Think I Love My Wife”), and “Top Five”, a critically-acclaimed (2014) film. He also produced “Good Hair”, a documentary on the history and perceptions of American women’s hairstyles.

Other Projects and Ventures

The show was later moved to The CW where it concluded its last season in 2009. Rock’s teenage experiences influenced the show’s content. It was nominated in 2006 for a Golden Globe for Best TV Series (Musical Or Comedy), 2006 People’s Choice Award, Favorite New Television Comedy, and two Emmy Awards for cinematography and costuming. Rock produced “Totally Biased” with W. Kamau Bell (2012).

Rock used his comedy experience and hosted the 77 Academy Awards 2005 as well as the 88 Academy Awards 2016. Rock, who is known for being a “dedicated cannabis consumer”, invested in Lowell Herb Co. in August 2019.